In view of the centenary of the establishment of the Communist Party of China (CPC), MMA recently organized for its staff a tour to the large scale photo exhibition celebrating the 100th Anniversary of the Founding of the CPC, and had received a warm welcome from Mr. Lai Chan Keong, member of the Administration Council of the Macau Foundation.

Led by Mr. Tommy Lau, Council Chairman of MMA, Mr. Vong Hin Fai, Council Vice-Chairman & Honorary Secretary General of MMA, Mr. Alex Mok and Ms. Simone Ho, Council Vice-Chairmen, the group was given a guided tour of the photos during the visit, which deepened their understanding of the century-long history of the CPC, enabling colleagues to strengthen their national knowledge and identity and to gain a deeper understanding of important milestones accomplished by the CPC.

To commemorate the 100th Anniversary of the Founding of the CPC, the large-scale photo exhibition is jointly organized by the State Council Information Office of the People’s Republic of China, the Macao SAR Government, and the Liaison Office of the Central People’s Government in the Macao SAR. The exhibition is divided into four sections featuring 298 vivid photos to form a comprehensive display of the centuries of struggle of the Chinese Communist Party through text and imagery: “Founding the CPC and Seizing the Great Victory of the New-Democratic Revolution”, “Founding the People’s Republic of China and Carrying Out Socialist Revolution and Construction”, “Promoting Reform and Opening Up and Creating and Developing Socialism with Chinese Characteristics” and “Advancing Socialism with Chinese Characteristics into the New Era, Completing a Moderately Prosperous Society in All Respects and Embarking on a New Journey to Fully Build a Modern Socialist China”. The group was benefited from an overview of its significant achievements during the country's reform journey across the fields of politics, economy, peoples' livelihoods and beyond.

Mr. Tommy Lau, Council Chairman of MMA stated that the photography exhibition included a number of precious and meaningful historical photos. He believed the staff was given an opportunity to learn of the Party and the country’s history as well as their sense of belonging, identity and pride towards the motherland.

Looking ahead, MMA would spare no effort to taking part in more national activities in enriching colleagues’ understanding of the Chinese history and contemporary development as well as dedicating to promoting patriotic and love of China and Macao spirit. 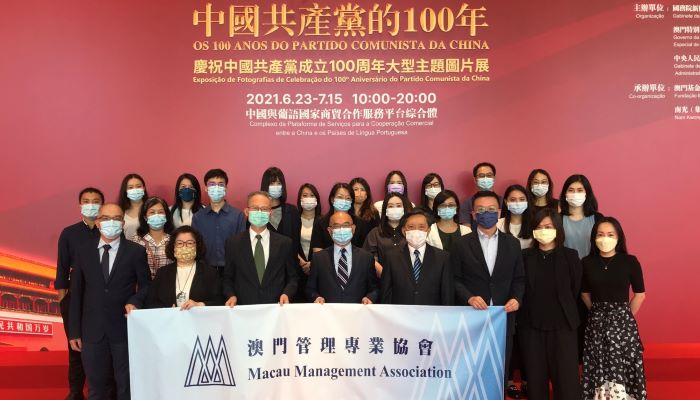