To strengthen MMA employee’s awareness of national security and their patriotism for the motherland and for Macao, the MMA team, led by Mr. Tommy Lau, Council Chairman of MMA and Mr. Alex Mok, Council Vice-Chairman of MMA, visited the National Security Education Exhibition jointly organized by Macao S.A.R. Government and the Liaison Office of the Central People's Government in the Macao S.A.R. on May 14, 2021.

The group were given a guided tour of the exhibition, which consists of four sections: “National Security amid Unprecedented Changes of the Century”, “Shaping the Landscape of Safety with a National Security Mindset”, “Upholding National Security for the Long-term Success of ‘One Country, Two Systems’” and “National Security as the Responsibility of All”. The exhibition highlights the country’s and Macao’s extraordinary achievements over the past year through nationwide anti-pandemic measures, as well as their latest progress in enhancing the national security system, so as to bolster public awareness of safeguarding national security and promote the notion of patriotism in Macao.

Mr. Tommy Lau, Council Chairman of MMA stated that with the support and care bestowed on Macao by the country has been maintaining the Macao’s long-term stability and prosperity. The exhibition had raised public awareness and education regarding national security in community and to recognize that was also a fundamental principle and basic requirement to maintain sustainable economic development, and will in turn help to inspire and cultivate their patriotic feelings towards the country, as well as their sense of belonging, identity and pride towards the motherland.

Looking ahead, MMA would spare no effort to align with Macao S.A.R. Government on the national security education promotion on the patriotic and love of China and Macao spirit and safeguarding the long-term stability and prosperity in Macao. 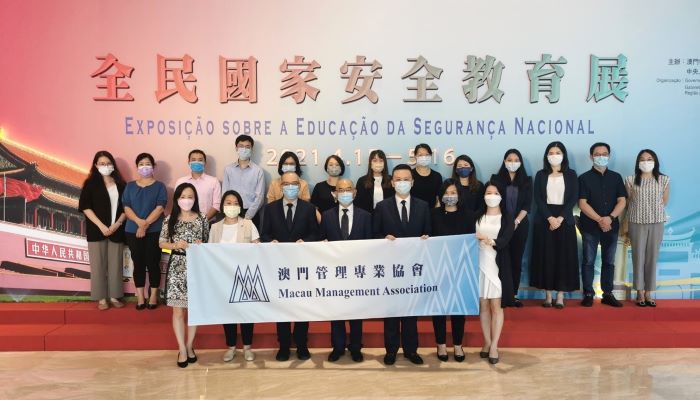